Recordings of an Immigrant | a project by Vincent Goudreau 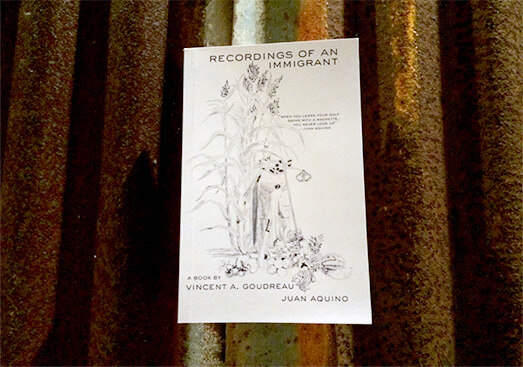 “When you learn your golf swing with a machete, you never look up” – Juan Aquino

Recordings of an Immigrant is a non-fiction narrative which inspired a multidisciplinary project including a book compiled from transcribed audio recordings.This is a survival story of one man’s journey from the genocide of Guatemala to the courtrooms of the United States.

The project is supported through the artist-in-residence program of Grand Central Art Center, a unit of California State University, Fullerton’s College of the Arts, with funding support provided by an anonymous donor and from The Andy Warhol Foundation for the Visual Arts.

On November 1, 1982 Juan Aquino witnessed his father’s murder. His father was on his way to present his case to the supreme court in Guatemala, fighting for the union worker’s rights and to close an industrial plant which was polluting the town’s river. It was also Juan’s 13thbirthday.

The following is an excerpt from chapter 5 part 2, titled Family. This audio piece is titled Revenge 13:28 minutes. 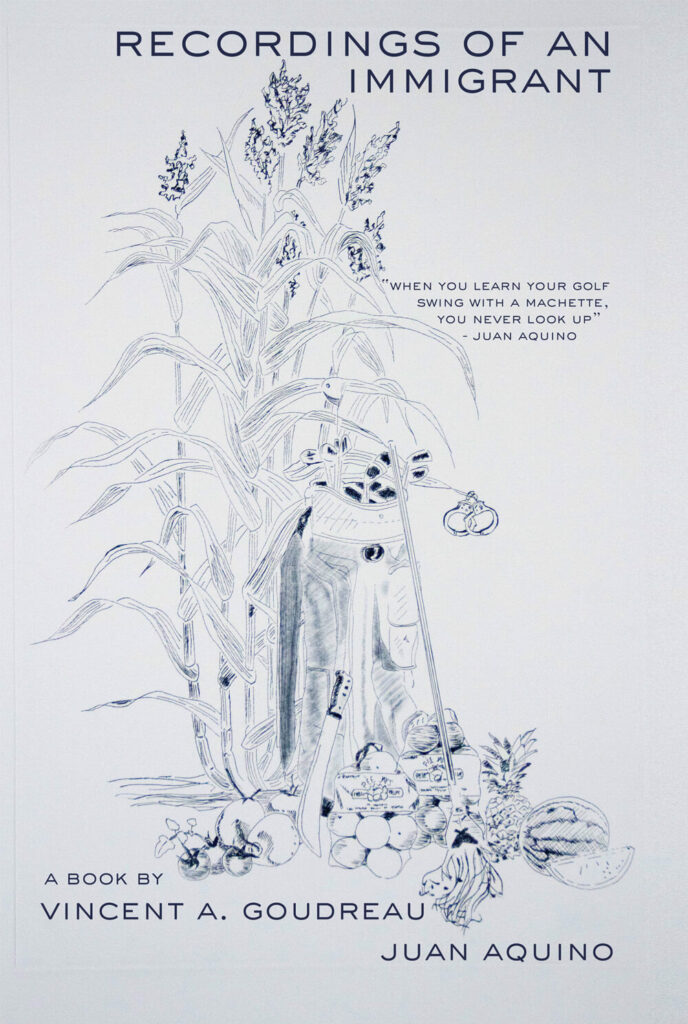 Juan Aquino wasn’t planning to come to the U.S., but after witnessing his father’s murder and watching his mother die from cancer two years later, he was forced to provide for his family. His journey began at the young age of fourteen.

The boundaries of Juan’s life and what they encompass reads more like an ancient epic of morality rather than a modern day story of immigration, poverty, violence and corruption. Yet this is a contemporary narrative amidst the U.S. immigration debate that also confronts taboo issues and explores how we as people judge one another.

Juan’s voyage of survival through Mexico and the hell that was south central Los Angeles in the mid-eighties eventually lands him in Hawaii, where he faces a whole new set of challenges and confronts the myth of island paradise. However, through his trial and tribulations, what he finds on the islands is his true calling and talents on the golf course. His perfect golf swing, indirectly taught to him by his father while hacking sugar cane with a machete, now has purpose.

This cinematic tale contains unpredictable twists and turns. What starts out as an inspirational story of migration, finding one’s home, and a man’s love and dedication to his family, moves into a realm fit for an audience of sports enthusiasts. Ultimately, Juan’s narrative embodies the taboo and politics when he is falsely accused of a crime. At this point, the line between protagonist and antagonist becomes blurred, forcing the reader to question their evaluation of Juan’s character.

After years of deliberation, Juan’s case is rightfully dismissed. With his family having a better life due to his continual help, Juan has a rebirth and a new beginning to fight one more battle —dealing with the trauma of his past in order to regain control of his future.

Juan’s timely, yet timeless, story confronts racial tension toward immigrants and stares into the universal struggle for acceptance. Furthermore, it exposes the atrocities committed in Santa Lucia, Guatemala, and the continual corporate and governmental injustices, leaving the reader to question whether this pattern can, and will, ever end. However, Juan’s perseverance and positive attitude towards humanity keeps his dream, as well as the reader’s hope, alive.

Credits
This project was created by Vincent Arthur Goudreau.